We’ve created a strong central downtown which boast 21 financial institutions, hundreds of stores and services with a circular “Ring Route” around our downtown marked by Red-Iron attractive fences and red lampposts. By design, our residential areas are relatively commercial free in order to concentrate our downtown area into an all commercial hub. We are trying now to mix Transit Oriented Housing into downtown living.

With 50,000 residents, Apple Valley has over 600 businesses with more than half as members of the Chamber of Commerce, more than twice the national average for Chamber participation.

20th Best Place to Live in the US

Apple Valley was named 20th Best Place to Live (also 2007, 2008 & 2010 top 30). This highly prestigious ranking is due to our strong business community, strong work ethic, our Top School District, Zoo and collaboration of the City and Chamber.

Why We’re So Independent

Although Apple Valley’s border is just 5-minutes from Minnesota’s largest mall, the Minnesota River between us both has actually helped build Apple Valley into a self-sufficient community. The small old bridge that used to go over the river inspired us to become almost totally independent. People feel little need to go “north of the river” but for professional sports, a concert or occasional play. We aren’t a bedroom community anymore but rather “the entire house.” Life is good here!

The result isn’t just a business community that was relatively unscathed during the recent recession, but actually grew.

We’ve also expanded our central corridor of Cedar Avenue which as of 2013 has dedicated lanes, priority signaling and every 15 minute run times for the 1st BRT (Bus Rapid Transit) in Minnesota.

Looking and acting like Light-Rail, but coming in at one tenth the cost, our downtown is undergoing a renaissance of higher density housing, pedestrian shops, bike paths, restaurants, entertainment and an overall improvement of life.

Our Future is Looking Up, “Uptown”

In 2011, Apple Valley Chamber President Ed Kearney co-chaired with our Mayor, the hosting of the American Institute of Architects redesign study. One of only 5 nationwide cities to win their grant for the study, they twice came here to study for weeks about how Apple Valley can be a city of the future. The results are astounding and took in the input of businesses, residents and chamber and city.

We will actively re-write our laws to accommodate more of an “UPTOWN DESIGN” which will attract more millennials and Gen-X’er’s. We’ll grow four distinct business quadrants downtown, each with their own design, zoning, ordinances and personality. And as our citizens grow their families, our vast array of traditional housing is just a short walk or trail away to grow in. And our empty-nesters can co-mingle with quaint downtown housing, transit, dining, shopping and pedestrian accommodations. We keep generations close and families even closer.

This new design combined with our present $1 billion dollar commercial downtown and our world class school district, “paints a bright red-apple wholesome” future for our residents and daily workforce.

The Chamber has been involved in helping plan it all for 42 years and is planning the next 40. If New York is the Big Apple and Minneapolis the “Minne” Apple, our nickname should reflect our shiny future. Certainly we’re an “Apple Seed” sprouting new growth. Nestled conveniently equidistant between Minneapolis and St. Paul, we are truly “A Place For A Lifetime.” 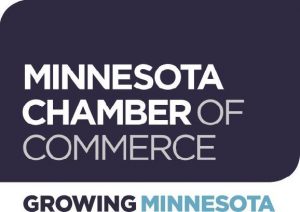 Special thanks to the MINNESOTA CHAMBER OF COMMERCE for tracking and analyzing these key trends.