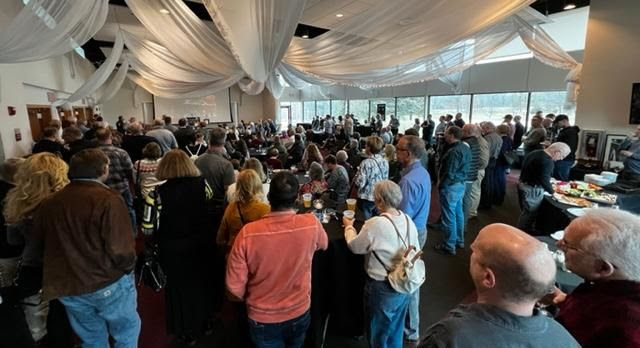 It was packed at the Valleywood Club House this past Wednesday evening for the retirement party of POLICE CHIEF JON RECHTZIGEL (paid by his own money). Jon spent his entire 35 year police career in the Apple Valley Police Department with his first ten years driving patrol. He worked his way up the ranks since 1987 to become Captain in 2005 and Chief in 2012 (replacing Chief Scott Johnson). City Council had 39 other applicants for Police Chief – including those from surrounding police departments – when they named Jon Police Chief in 2012.
Jon is an example of how education is so important to Apple Valley City Council when hiring and promoting. Jon has a BA from Concordia College, Master’s in Police Leadership from Univ. of St. Thomas and also graduated from the FBI National Academy. He oversaw a police department of 60 with 50 of them being officers.
The receiving line was long for everyone wishing Jon a happy retirement. Chamber President Ed Kearney on behalf of the business community thanked Jon for having his officers work so hard on crime prevention, reporting, theft and especially all the uncertainty these past few years when so many buildings and businesses were unoccupied and vulnerable.
Share