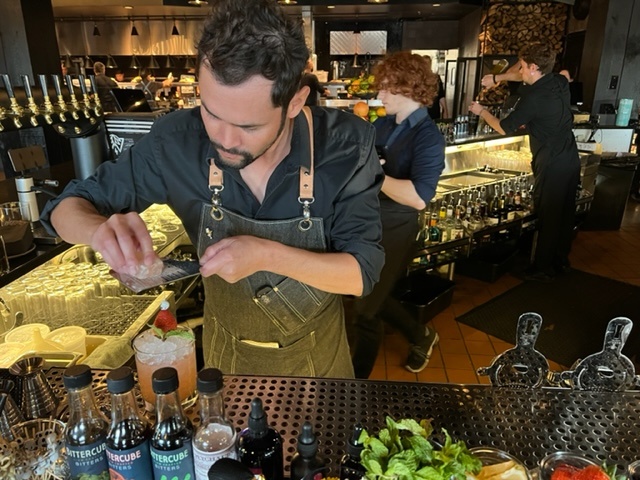 As we reported yesterday, Tony the Owner of Misfit’s Collective announced on social media last week that their unique service model just wasn’t working and was confusing to their patrons. They closed last week to revamp everything and change their concept to a MEXICAN THEME.
Last night we attended a private soft opening and wow, was it ever great! Tony told us that if you are trying to impress, their entrees are upscale while the prices are not. As a matter of fact their happy hours and their late night after 9 are half price on much of the food and even two-for-one on drafts and certain wines. What is even more unique is their full wall variety of several hundred bottles of Mezcal and a vast variety of Tequila. No one in the Twin Cities has such a variety.
In addition, the service and attention to detail was amazing. We watched them make a margarita where they shaved the salt by hand off of a Mexican salt stone for the rim of the glass. It was amazing just to see all the work and care going into it.  The tacos were cooked on a woodfire grill was succulent with a wood toasted shell and a full thick meal of shredded pork as well as a special dipping sauce. Their entrees are so varied from wood fired lamb, chicken, Tequila-Pepita Butter Glazed Pork Chop, an amazing pineapple charred salmon, ribeye, or even a NY Strip just to show the variety in addition to all the Mexican fare.
Be one of the first to explore quality Mexican food and sincere service throughout. Mezcalito Butcher will certainly draw diners from all over the Twin Cities to experience their new format, menu and service model.
Share