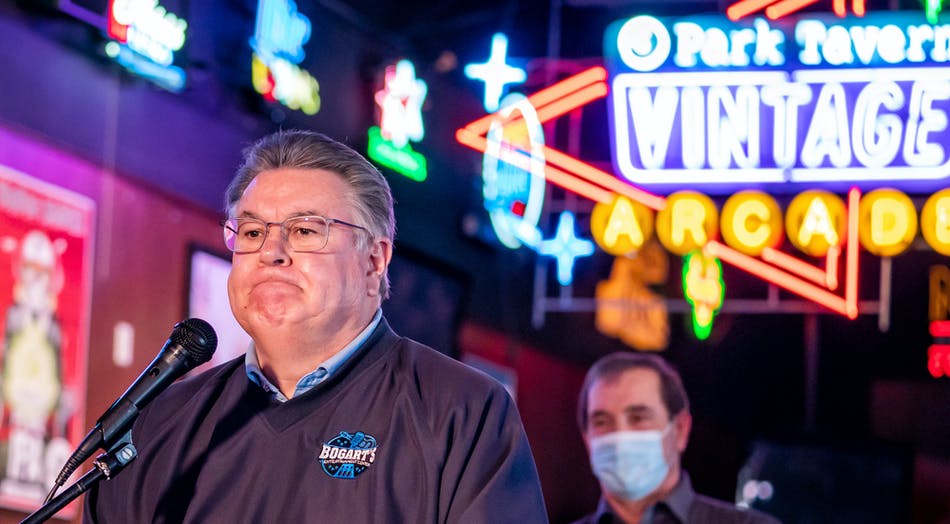 APPLE VALLEY CHAMBER NOTE: We found this article from the Star Tribune about a lawsuit that the Minnesota Operators of Music & Amusement Association (MOMA) filed against Governor Walz. Scott Koecheler (shown in photo above) one of the Owners of Bogart’s Entertainment Center, is a plaintiff in the suit challenging COVID restrictions.

Amusement operators in Minnesota — providers of games, jukeboxes and ATMs to restaurant and bars — are the latest group to challenge in court the business restrictions put in place by Gov. Tim Walz during the pandemic.
The Minnesota Operators of Music & Amusement Association, or MOMA, and a handful of other businesses filed a lawsuit Thursday against Walz and several of his commissioners arguing that the 11 p.m. curfew and other constraints on bars and restaurants are unconstitutional. The lawsuit notes that other establishments, such as retail stores, aren’t subject to the same restrictions.
The association represents about 25 family-run businesses, which employ an estimated 700 people in the state. They depend on restaurants and bars being open because they split revenue from the games that are placed in them.
CLICK HERE TO READ THE FULL STAR TRIBUNE ARTICLE >
Share