An Exclusive Inside Look at Cowboy Jack’s Apple Valley 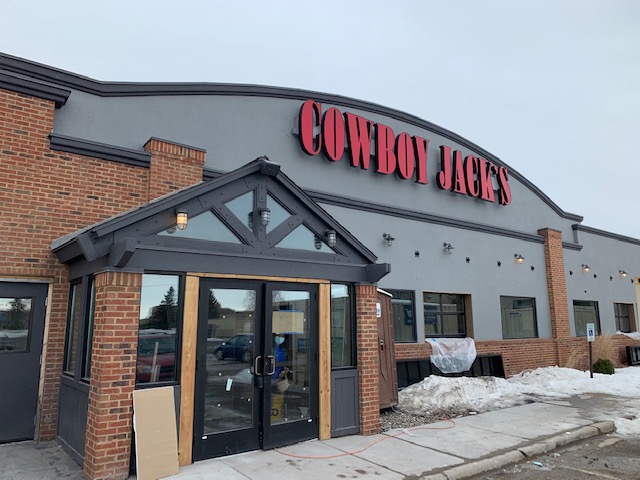 An Exclusive Inside Look at Cowboy Jack’s Apple Valley

There is great interest in Cowboy Jack’s replacing the former Old Chicago in Apple Valley. When it was first announced on social media by Apple Valley Chamber in 2020, nearly 80,000 people viewed our Chamber’s social media announcement as the news caught fire. People are very interested!
The restaurant is owned by Brian Michael and his wife Melissa. We did not get a chance to meet Melissa but Brian said is the star. Brian and General Manager Tanner Wandmacher gave Chamber President Ed Kearney a tour. The entire facility (front of the house and back through the kitchen) was totally gutted with walls removed for openness, two huge bar areas, relocated restrooms and several rooms moved. The entire look will have a “cowboy” western feel including large Texas bullhorns and even a buffalo head on the back wall. They will not have a riding bull.
OUR HIGHLIGHTS OF COWBOY JACK’S APPLE VALLEY
They are currently hiring for all positions (up to 40 jobs) interviewing many job seekers while we were touring (job text: 612-559-0670). They are excited to work closely with neighboring businesses long-term. Owner Brian Michael is very civic minded as he is also President of Minneapolis Entertainment & Hospitality Association and loves helping all restaurants succeed. Brian has big plans to bring his hospitality ideas and community citizenship to Apple Valley dining, both indoors and outdoors. He told us that he feels being in Apple Valley will bring even more business to other restaurants here in what is a “clustering effect” in much the same way Raising Cane’s has brought new diners into our city.
As we mentioned several months ago, Brian will own the Apple Valley location. Only one other Cowboy Jack’s is owned as a franchise with all others being company owned. Brian and Tanner really are looking forward to being here and serving Apple Valley.
Share